How to Begin Writing Your Own Book—and MAKE MONEY!?

Becoming a best-selling author was not an easy road. In fact, my first attempt at writing a book was a miserable failure for many reasons.

My first book was called, “If You Want To Be Rich And Happy, Don’t Go To School”. In Australia, it was a best-seller but in Hong Kong, it was very controversial. I wrote it because, at the time, every speaker had to have a book.

As you know, I really hated school. I really thought that in many ways it was a scam. Although I was passionate about the subject matter of “If You Want To Be Rich And Happy, Don’t Go To School,” I had no passion for why I was writing it. I was doing it because everyone else was doing it.

During a promotional tour, Simon & Schuster, one of the largest publishers called, and we met to discuss if they were going to buy the book. Long story short they rejected the book. But I learned a valuable lesson about writing books during that meeting.

The executive said, “You’ll have a best-seller when you tell people what you know.”

Wow! It was eye-opening advice and totally changed my life forever.

So after re-thinking what I was going to write about, for about six months, I sat in the quaint, artist’s town of Bisbee, Arizona in an old jail that had been converted into an apartment. At one time, John Wayne owned that old jail, as a rental property. He loved Bisbee—and Southern Arizona, where he owned a large ranch.

During the day, I was working on my small ranch, converting an old stagecoach depot (a stopping point between Bisbee and the infamous town of Tombstone, where the gunfight at the OK Corral took place) into a one-bedroom home. At night I would sit in the jail, writing a book. It was a painful process. There were many starts and stops, fits, and starts. Finally, late one night, exhausted from working on my property and tired of struggling with a book concept, my fingers began typing the opening lines of a new book. It began with the words “I had a rich dad and I had a poor dad.”

There are two reasons why one would self-publish a book. One, because you have to.

The reason I self-published Rich Dad Poor Dad was that every publisher I sent it to turned it down. Most publishers were polite, but simply told me they had no interest in the book. Two sounded like my English teachers telling me I needed to learn how to write. One publisher said, “Your story is preposterous! No reader will ever believe it.” And an editor who specializes in financial books rejected it, saying, “You don’t know what you’re talking about.” He was referring to my lesson in Rich Dad Poor Dad where I stated, “Your house is not an asset.” Of course, after the subprime crisis, millions of foreclosures, and all the homes that are worth less than their mortgages.

Taking the rejection in stride, Kim and I self-published 1,000 copies of the book and quietly released it at my birthday party in April 1997.

The second reason one would self-publish a book is that you can.

Sometimes, self-publishing is the best decision. Not for everyone, but for a lot of people it’s a good idea. For us, it was the only way to go. What solidified the decision for us was after being invited on the Oprah Show, suddenly Rich Dad Poor Dad became an overnight success, and we didn’t have to share any of the money with a publisher!

Before you start any of the technical processes, you have to know your why. Why do you want to write a book? For me, I knew that school didn’t teach people anything about money and that’s why so many people struggle with their finances. I wanted to warn people and to help them use financial education to prepare themselves for whatever happened in life.

When I sit down and think about the book I want to write I start with a mind map. I put everything on paper that I can think of regarding that topic.

Once you get all your ideas on paper, you need to turn it into an outline. Now, this step in the process is not easy for me. Other than editing, this is where I need assistance. But the purpose of putting your ideas into an outline is to organize your thoughts into a story that makes sense regardless if you’re writing a fictional or non-fictional book.

#3 Get your rough draft finished

After you have your outline finished, now is the hardest part of all for me. As I said earlier, when I started to write Rich Dad Poor Dad I escaped to a small, quiet town in Bisbee, AZ. For me, I needed a space with no distractions. With other books, I’d lock myself in a room at home so I could focus.

After you have your rough draft complete, the hardest part is over.

Early on, Kim and I knew this fact so we hired a PR person to focus on getting publicity for our books. We did promotional tours, we did book fairs, really anything to help us sell the books. In fact, she’s still with us today!

Over the years, The Rich Dad Company has spent a lot of time on PR. When Rich Dad Poor Dad was published we used a service that booked authors on radio shows across the country. Every week, I would get on the phone with radio show hosts and tell the story of my rich dad and my poor dad. I was not selling, I was simply telling the story. By telling the story, I got people to want to buy the book.

Inevitably, at the end of every interview, the radio show host would ask, “Where can our listeners find your book?” I would say, “At bookstores everywhere.”

People went into bookstores, asking for Rich Dad Poor Dad. They wanted to buy it. The bookstores didn’t need to “sell” the book—because we let publicity drive sales. And those sales—the direct result of PR outreach and interviews—propelled Rich Dad Poor Dad on to The New York Times bestsellers list.

P.S. Before Trump was President… We wrote an important book together. 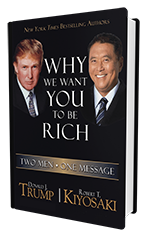 Donald Trump laid out his brilliant ideas about America’s financial system in this book long before he was president. We wrote it together.

Click here now to find out how to claim your copy.

If you only have a few thousand saved for retirement…

Check out more details on this incredible offer now… before it comes offline.