Will the Fed Save the Dollar or the Economy?

What will the Fed chairman do next?

If he prints more money, that’s good news for gold bugs like me, but bad news if you save your money.

Just as markets go up and down, so does inflation. Since February of this year, the Federal Reserve Bank has flooded the economy with trillions of dollars to provide economic stability and liquidity. The long-term effect of all this printed money may lead to inflation, which means the U.S. dollar will go down in value.

If inflation sets in, anything of questionable value will lose value, while things of value—assets such as real estate, gold, silver, and utility stocks—may greatly increase in value.

Those of us old enough to remember the late 1970s may remember when inflation went through the roof, interest rates hit all-time highs, and the stock market went down.

I am not saying that such a time will come again, but I would be vigilant. If we enter a period of high inflation and high-interest rates, people counting on their pension plans and mutual funds may find themselves in serious financial trouble.

If inflation rears its ugly head, savers will be punished and debtors will be rewarded, just as in the late 1970s.

Why Savers are Losers

So saving worked even better for the parents of the World War II generation. But ever since 1950, savers have been losers simply because savings are taxed at a high rate, and inflation wipes out most of the gains. In early 2002, the interest rate paid on saving is about two percent. Many savers have been severely crippled because of this drop in interest.

The point is, advising people to save used to be good advice, and it still is good advice for the poor and the middle class. But for anyone wanting to become rich, simply saving money in an old-fashioned way is bad advice.

Think of the global economy as a big hot-air balloon. Things were going along splendidly until August 6, 2007, when too much hot air—debt—caused a tear in the balloon. As the horrifying ripping sound spread, central banks of the world began pumping more and more hot air—debt—into the balloon in an attempt to keep it from crashing to the ground and causing a depression.

For some people, deflation makes the best of times. The cost of living would down as the prices of oil, real estate, stocks, and commodities drop and thus become more affordable. The central banks and governments of the world, hoping people, businesses, and governments will get deeper into debt by borrowing more money, are pumping trillions of dollars into the economy at interest rates near zero—virtually free money.

One Final Point About History

The Founding Fathers opposed central banks like the Federal Reserve. President George Washington experienced the pain of government-made money when he had to pay his troops with the continental, a currency that eventually went to its true value—zero. Thomas Jefferson adamantly opposed the creation of a central bank. Yet today central banks control the financial world, and we’ve granted them the power to solve our financial crisis for us, the very crisis they helped create.

Simply said, a central bank can create money out of nothing and then charge us interest on money it did not earn. That interest is paid via taxes, inflation, and, today, deflation, which results in the loss of jobs and value in our homes. The policies of the Fed aren’t abstract realities. They are powerful actions that determine your financial well being in both open and hidden ways.

Anyone who purchases a home knows that for the first years most of your mortgage payment goes to the bank to pay down interest, and that very little goes toward reducing the principal. The bank effectively receives interest payments for money it did not earn but rather created out of thin air.

Allowing banks to effectively create money out of thin air via the fractional reserve system robs us of our wealth by devaluing our dollars. Today, the central banks of the world are printing trillions of dollars, which will be paid by us via debt, taxes, and inflation. 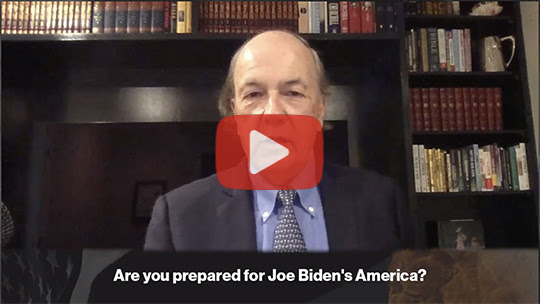 You may not want to listen to what this government insider says right here about the 2020 election.

Then millions of American families could see their lives change as they know it.